Satan Roars! Whispering His Lies! is now available on Amazon.com 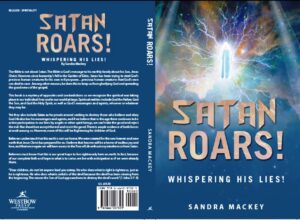 The Bible is not about Satan. The Bible is God’s message to his earthly family about his Son, Jesus Christ.  However, since humanity’s fall in the Garden of Eden, the devil has tried to bait us with false teaching, lure us into sin, and turn us against each other. Among other reasons, he does this to keep us from glorifying God and spreading the good news of the gospel.

This book is a mystery of opposites and contradictions as we recognize the spiritual war taking place in our individual lives and in our world at large. Spiritual realities include God the Father, God the Son, and God the Holy Spirit, as well as  God’s messengers and agents, whoever or whatever they are.  But they also include Satan as he prowls around seeking to destroy those who believe and obey God. He also has his own messengers and agents, and if we believe that in this age there continues to be active participation in our lives by angels or other spirit beings, we can’t take the good and reject the evil.  Nor should we accept the evil and resist the good.  There is ample evidence of both forces at work among us.

A lion’s roar can be heard up to five miles away and is intended to terrify all who hear it. Lions roar to establish their territory and to communicate their power. But a roar is just noise. It is threatening but powerless. Our enemy, Satan, roars his threats, doubts, and accusations in an effort to terrify us into giving up so he can defeat us. He roars because he knows his time is short and that the Lord will utterly destroy him. Even the threat of a roaring lion cannot overcome those who stand firm in the Lord.

As a metaphor, Jesus is called the Lamb of God to describe his gentleness and humility to be the sacrifice for our sins. But Jesus as the Lion of the tribe of Judah displays his absolute authority and power over all creation. Just be assured that God’s will is for his people to be righteous, and the soul that is filled with his Holy Spirit has no room for Satan and no reason to be afraid.

Be alert and of sober mind. Your enemy the devil prowls around like a roaring lion looking for someone to devour. (1 Peter 5:8)