Last month, I began to look at the concept of proving that the Bible is true. As I said earlier, “trying to prove the Bible is true is like striking a match to see the sun!”  Our FAITH makes us certain that the Bible is true, but this month’s Bowl of Webstable Soup stretches our minds to see through the eyes of faith that science has only recently, maybe only a few hundred years, discovered information about our existence that the Bible told us was true many hundreds of years ago.  Think about these things.

SCIENCE AND THE BIBLE – TIP OF THE ICEBERG 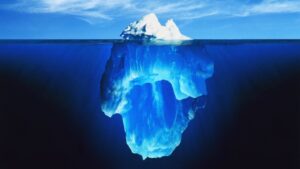 Some of the following research will not be pleasant to read, but I have found it to be very pertinent in the events of our world today.  I hope you will be interested enough to click on the Endnote Links to read that not what I have said is true, but to read the scientific evidence of what the Bible says is true.

The writer of the book of Hebrews gives us many examples of faith in action.  Starting out in chapter 11 by explaining the meaning of faith.

11 Now faith is confidence in what we hope for and assurance about what we do not see. 2 This is what the ancients were commended for. 3 By faith we understand that the universe was formed at God’s command, so that what is seen was not made out of what was visible.[ii]

Here are 4 ways that scientific research has proven the Biblical account of a matter to be scientifically reliable. We can call it part of the evidence that provides a few reasons for our faith…the tip of the iceberg.

Biblical teaching on the Earth’s positioning in space:

In the Book of Job, we learn of the Earth’s positioning in space: “He spreads out the northern skies over empty space; he suspends the earth over nothing” (Job 26:7). Scholars believe that the Book of Job was written as early as the 2nd millennium BC or later between the 6th and 4th centuries BC.

Whatever the precise dating, this verse in Job demonstrates that God told us before the time of Christ that our planet is held up in space by no visible means of support.

Scientific acceptance of the Earth’s positioning in space:

Throughout history, humanity has espoused different theories as to the Earth’s placement. In Ancient Greece, Aristotle noted in the 4th century BC that the oldest theory about the Earth’s positioning was that the Earth rested on water.

This scientific finding proves the veracity of Scripture’s teaching on the Earth’s suspended position in space.

Biblical teaching on blood as a source of life:

Scripture reveals the importance of blood in straightforward fashion by declaring that, “the life of a creature is in the blood” (Leviticus 17:11). The Book of Leviticus is comprised of writings dating as far back as the 15th century BC and was compiled into its final form by the 6th century BC. Thus, Scripture has advised us for centuries of blood’s pivotal role in keeping our bodies healthy.

Scientific acceptance of blood as a source of life:

Ancient medical scholars believed that the body was made up of different liquids, including blood, that had to be balanced for a person to remain healthy. Because there is no natural way to discharge a perceived excess of blood other than through menstruation, the medical practice of bloodletting came into practice.

In bloodletting, doctors use sharpened tools or leeches to drain “excess blood” from a patient in an effort to cure the patient’s illness. Bloodletting was an accepted medical procedure worldwide until it was discredited as an ineffective medical practice in the late 19th century AD.

One notable person who died after bloodletting was George Washington. Specifically, one cold night in 1799, Washington developed a fever and a swollen sore throat. Within hours of falling ill, doctors had drained Washington of almost half of his blood. Washington died the next day from what doctors have retrospectively diagnosed as a severe throat infection and shock.[iii]

Although bloodletting is still used in the present day in very specific medical procedures, bloodletting is generally discredited as an ineffectual treatment for the majority of ailments. Instead, research has found that depleting the body of such vast amounts of blood can trigger a hazardous drop in blood pressure, lead to cardiac arrest, and increase the chances of infection or anemia.

It’s now common medical practice to administer—not deplete—blood to save people’s lives. According to the American Red Cross[iv], 21 million blood components are transfused to patients every year in the United States alone to replace blood loss during major surgery, after serious injuries or accidents, or due to illnesses.

Biblical teaching on the necessity of quarantines:

Particularly in light of our past two-year pandemic with Covid, God warns us of the importance of separating the sick from the healthy. Though in light of today’s modern medical advancements it may seem harsh, Leviticus instructed the Hebrews that those with contagious diseases were to identify themselves through physical appearance and proclaim they were “unclean” while covering their mouths. The contagious were also to “live alone…outside the camp” (Leviticus 13:45-46).

Scientific acceptance of the necessity of quarantines:

The medical practice of quarantining[v] contagious people didn’t begin until the 14th century AD. By that time, the world had suffered devastating health pandemics[vi] due to the lack of containment of communicable diseases.

By the 14th century AD, European officials scrambled to protect coastal cities from potential plague epidemics. Ships arriving in Venice from ports known to be infected were required to anchor at sea for 40 days before landing. This practice became known as a quarantine, from the Italian words quaranta giorni, meaning 40 days.

Today, scientific research has found that quarantining people believed to be carrying infectious diseases is a powerfully effective way to contain the spread of those diseases. [vii] Even in our everyday lives, parents knowingly or unknowingly follow the Bible’s teaching on infectious diseases by restricting the interaction between sick and well children, and by teaching children to cover their mouths when sneezing or coughing to prevent the spread of sickness.

Biblical teaching on the health benefits of positivity:

God cares about our emotional well-being and teaches us that our psychological well-being is linked to our physical well-being. Written as early as the 8th century BC, the Book of Proverbs advises us that: “A cheerful heart is good medicine, but a crushed spirit dries up the bones” (Proverbs 17:22), and that: “A heart at peace gives life to the body” (Proverbs 14:30). The Proverbs, also called The Book of Proverbs, an Old Testament book of “wisdom” writing found in the third section of the Jewish canon, known as the Ketuvim, or Writings.

Scientific acceptance of the health benefits of positivity:

Despite Scripture’s teachings on the mind-body connection, scientific research on the healing power of optimism[viii] wasn’t embraced by the medical world until the late 20th century. Now, the mind-body link is such a respected tenet of the medical community that world-renowned academic medical institutions such as the Mayo Clinic[ix] and Johns Hopkins[x] promote positive thinking as a way to maintain physical health.

Both medical research powerhouses encourage us to make positive thinking a priority in our lives by finding the humor in the everyday, counting our blessings by reframing hardships, and surrounding ourselves with positive, supportive people.

Furthermore, Johns Hopkins[xi] has found that people with a family history of cardiovascular disease who also possess a positive outlook are one-third less likely to suffer a heart attack or other cardiovascular event within 5 to 25 years than those with a more negative outlook. This research also highlights the link between positivity and reduced stress, and the link between negativity and a weakened immune response.

As the inspired Word of God, the Bible is a centuries-old roadmap on living well—mind, body, and soul. And if you don’t believe that, then believe the scientific research that backs it up. *

[vii] Lessons from the History of Quarantine, from Plague to Influenza A – Volume 19, Number 2—February 2013 – Emerging Infectious Diseases journal – CDC