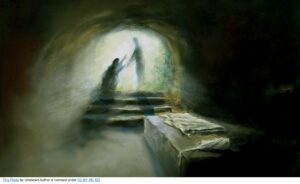 A popular destination in Jerusalem is the Garden Tomb. At this site, visitors can see an old rock-cut tomb, which many believe may be the tomb in which Jesus’ body was placed after the crucifixion.

While the exact location of Jesus’ burial is uncertain, the Garden Tomb remains a popular site for Christian travelers in the Holy Land. The tomb is empty and provides a visual example of what Jesus’ burial site may have looked like after the stone was rolled away on the day of His resurrection.

The Burial of Jesus

John 19:38 Later, Joseph of Arimathea asked Pilate for the body of Jesus. Now Joseph was a disciple of Jesus, but secretly because he feared the Jewish leaders. With Pilate’s permission, he came and took the body away. 39 He was accompanied by Nicodemus, the man who earlier had visited Jesus at night. Nicodemus brought a mixture of myrrh and aloes, about seventy-five pounds. 40 Taking Jesus’ body, the two of them wrapped it, with the spices, in strips of linen. This was in accordance with Jewish burial customs. 41 At the place where Jesus was crucified, there was a garden, and in the garden a new tomb, in which no one had ever been laid. 42 Because it was the Jewish day of Preparation and since the tomb was nearby, they laid Jesus there. [i]

The Importance of the Rolling Stone

Tombs during the days of Jesus differ from modern graves and mausoleums. Because Jesus was buried in a tomb owned by the wealthy Joseph of Arimathea, the tomb was new and able to be sealed with a rolling stone (Mark 15:46). Such tombs were commonly hewn out of rock and were sealed with a heavy stone to close the entrance. Clearly, such a stone to be rolled over the entrance to the tomb would require multiple people and a lot of strength to move. Joseph of Arimathea did not push the stone in place by himself, but rather had the assistance of Nicodemus, who was also a follower of Christ (John 19:39-42). The strength of both men would have been required to roll the large circular stone to close Jesus’ place of burial.

The women were present when Joseph of Arimathea and Nicodemus prepared the body and placed Jesus in the tomb. Observing where Jesus’ body was placed, in Nicodemus’ new family tomb, the women took note of the spot with the plans to return after the Sabbath to lovingly anoint the body. On that Sunday morning, however, they would question how they would roll back the heavy stone to enter the tomb.

Matthew 28: After the Sabbath, at dawn on the first day of the week, Mary Magdalene and the other Mary went to look at the tomb. 2 There was a violent earthquake, for an angel of the Lord came down from heaven and, going to the tomb, rolled back the stone and sat on it. 3 His appearance was like lightning, and his clothes were white as snow. 4 The guards were so afraid of him that they shook and became like dead men. 5 The angel said to the women, “Do not be afraid, for I know that you are looking for Jesus, who was crucified. 6 He is not here; he has risen, just as he said. Come and see the place where he lay. 7 Then go quickly and tell his disciples: ‘He has risen from the dead and is going ahead of you into Galilee. There you will see him.’ Now I have told you.” 8 So the women hurried away from the tomb, afraid yet filled with joy, and ran to tell his disciples. 9 Suddenly Jesus met them. “Greetings,” he said. They came to him, clasped his feet and worshiped him. 10 Then Jesus said to them, “Do not be afraid. Go and tell my brothers to go to Galilee; there they will see me.”

Mark 16: When the Sabbath was over, Mary Magdalene, Mary the mother of James, and Salome bought spices so that they might go to anoint Jesus’ body. 2 Very early on the first day of the week, just after sunrise, they were on their way to the tomb 3 and they asked each other, “Who will roll the stone away from the entrance of the tomb?” 4 But when they looked up, they saw that the stone, which was very large, had been rolled away. 5 As they entered the tomb, they saw a young man dressed in a white robe sitting on the right side, and they were alarmed. 6 “Don’t be alarmed,” he said. “You are looking for Jesus the Nazarene, who was crucified. He has risen! He is not here. See the place where they laid him. 7 But go, tell his disciples and Peter, ‘He is going ahead of you into Galilee. There you will see him, just as he told you.’”  [ii]

A rolling stone used to seal a tomb may not seem very special, but because the stone had been rolled away from Christ’s place of burial, it left evidence of an empty tomb with no body. Such happenings testify to the truth of the resurrection of Jesus Christ, the most important event in history.

The stone being rolled away was significant. Jesus could turn water into wine! (John 2:1-11). He could walk on water! (Matthew 14:25). He could control storms! (Luke 8:24). He could cast out demons, heal the sick, and raise the dead! (Mark 5; John 12:9). Remember how he could disappear on his own?  31Then their eyes were opened and they recognized him, and he disappeared from their sight (Luke 24:31; John 8:59). Who’s to say his spirit didn’t just disappear through the stone?

Think about it! Jesus was God in the flesh; creator of mountains and seas (John 1:1-5; Colossians 1:16-17); friend of little children (Matthew 19:4), and savior of shamed, hurting sinners (John 8:1-11).  We cannot limit his power over time and space to keep Him behind a stone!

Jesus did not have a secret resurrection. Anyone could go to the tomb and see that Jesus’ body was no longer inside. For the women who visited the tomb, the moved stone and vacant tomb were verifiable evidence of Jesus’ resurrection. Because Jesus deliberately included these details on the day of His resurrection shows that He wants people to investigate the truth and know what happened. Examining and discerning the evidence is what Peter did when he went to the tomb. As John 20:6-7 states, “He saw the strips of linen lying there, as well as the cloth that had been wrapped around Jesus’ head. The cloth was still lying in its place, separate from the linen.”

Today, people can still examine the evidence that Jesus left behind through the accounts of the gospels. All four gospels include the events of the resurrection, which individuals can read and study for themselves (Matthew 28; Mark 16; Luke 24; John 20). The rolled-away stone and  the empty tomb continue to serve as evidence of the resurrection of Jesus Christ our Lord!

[ii] What Is the Significance of ‘They Found the Stone Rolled Away from the Tomb’? (Luke 24:2) (christianity.com)