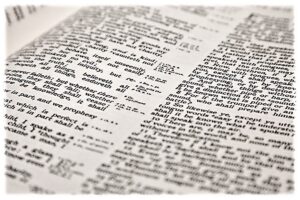 “Demanding proof that there is a God is like striking a match to see the sun.” ~ Author unknown.

That little quote is a deep spiritual thought that not only applies to God, but to any religious item or idea; the Bible, for instance. Our constant question might be, “How do I know this is real or true? Show me proof!” And yet, we could not prove it yesterday; we can’t prove it today, nor will we be able to prove it tomorrow! THE ANSWER IS ACCEPTED BY FAITH! And faith comes as a result of evidence we can see, read, learn, and accept as true.

“Now faith is confidence in what we hope for and assurance about what we do not see.” (Hebrews 11:1 NIV)[i].

Growing Up with God’s Word

I was extremely blessed growing up with Bible scholars for parents and grandparents on both sides of my family. They taught me that the Bible is the Word of God. I firmly believe that now, but at an earlier period in my life, I began to wonder if my own faith was truly my own faith, or was it only my family’s faith that had rubbed off on me? That is when the memories kicked in…seeing my dad study the Bible, hearing his sermons about faith that comes from a personal relationship with the Scriptures; coming to the realization that it is truly the most amazing book ever written!! The Word of God is perfect, and it’s completely trustworthy. I don’t accept or judge the Bible through “blind faith” as I may have as a younger person, nor do I challenge everyone who disagrees with my personal faith. Each person must find their own personal faith!

Technically speaking, it’s not one book but actually 66 books written over a span of 1,500 years. The words of Scripture were inspired by God and written by 40 authors from every walk of life, including poets, statesmen, kings, peasants, philosophers, fishermen, and scholars. And all of them write about God’s redemption of humanity through Jesus Christ.

20Above all, you must understand that no prophecy of Scripture came about by the prophet’s own interpretation of things. 21For prophecy never had its origin in the human will, but prophets, though human, spoke from God as they were carried along by the Holy Spirit. (2 Peter 1:20-21)

One of the most beautiful things about the Bible is the way it uses small, seemingly insignificant stories to showcase the glory and vast love of God, our heavenly Father. From the parables Jesus used to illustrate His teachings to the words and lives of the prophets and other historical Bible figures, we can dive deeper and collect important wisdom about our Lord.

In the beginning, God…

“In the beginning God created the heavens and the earth.” (Genesis 1:1)

Jesus Christ and His followers were fearless when it came to proclaiming God’s Word. What gave them such boldness and self-assuredness? They knew without a shadow of doubt the eternal power and absolute trustworthiness of each word in Scripture. They also knew that the Holy Spirit went before them, impressing hearers with the truth of His Word.

“For I am not ashamed of the gospel, because it is the power of God that brings salvation to everyone who believes: first to the Jew, then to the Gentile. 17For in the gospel the righteousness of God is revealed—a righteousness that is by faith from first to last, just as it is written: “The righteous will live by faith.” 18 The wrath of God is being revealed from heaven against all the godlessness and wickedness of people, who suppress the truth by their wickedness, 19since what may be known about God is plain to them, because God has made it plain to them. 20For since the creation of the world God’s invisible qualities—his eternal power and divine nature—have been clearly seen, being understood from what has been made, so that people are without excuse.” (Romans 1:16-20)

Billy Sunday was a professional baseball player who later became a well-known evangelist. Throughout Sunday’s evangelistic career, the kingdom of God was expanded by an estimated 300,000 souls. He preached more than 300 revivals with an estimated 100 million attendees.

Billy Sunday was born William Ashley Sunday in Story County, Iowa. Billy’s father, William, died of pneumonia in a war camp four months after Billy’s birth. Billy’s mother, Mary, eventually remarried, but her second husband ended up leaving them. Unable to provide for all her children, Mary sent Billy and his older brother to an orphan’s home.

During his time at the orphanage and beyond, Billy Sunday proved himself a talented athlete; at the age of 21, Sunday was signed to the Chicago White Stockings. He became a fan favorite and eventually moved to the Pittsburgh Pirates in 1890. Billy wasn’t the most consistent player, with a lifetime batting average of .248, but he was an exciting base runner—the first player to round the bases in 14 seconds. Throughout his eight-year career, he stole a total of 246 bases.

Off the baseball field, Billy Sunday’s life was spiraling out of control. In 1886, while Sunday was still living in Chicago, an evangelistic team from the Pacific Garden Mission found him in the gutter after a drinking spree and gave him the gospel. Billy responded in faith to the message of Christ, and after his conversion his teammates and fans saw a marked change in his behavior and habits. A few years later, in 1891, Sunday officially ended his baseball career and began to work for the YMCA as assistant secretary. The position paid far less than he had received during his baseball career, but he gained experience that would later be invaluable to his evangelistic efforts.[ii]

That is still good advice!

How Do We Choose the Correct “Ultimate Standard”?

Since we must appeal to some ultimate standard, the next question is how to determine the right one. One, and only one, logical solution is available. The standard itself must be “self-attesting” and “self-authenticating.” In other words, it must speak for itself and defend itself in such a way that it (1) passes all its own standards of truth and (2) gives a foundation for successfully interpreting all other claims to truth.

If you don’t believe the Bible is sacred, the word of God, and that one ultimate standard, you may have problems developing a faith that it contains a message that is directly from God, and trustworthy for life’s lessons. Somewhat like a cookbook, we must follow the recipes in the book to determine if the cookbook is trustworthy. The Bible is like that.  First, we must have the curiosity to open it, read it, and study it to determine what it says…what its message is to me, personally. In other words, we form our faith in godly matters by reading and understanding the Bible.

The writer of the book of Acts (Luke) clarified this concept:

“Now the Berean Jews were of more noble character than those in Thessalonica, for they received the message with great eagerness and examined the Scriptures every day to see if what Paul said was true.” (Acts 17:11)

Romans 10:17 says, “Consequently, faith comes from hearing the message, and the message is heard through the word about Christ.”

(To be continued next month with evidence that the Bible is true.)