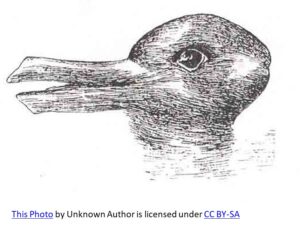 Is it a duck or a bunny?

This first bowl of Webstable Soup for January 2022 is dedicated to my longest (since we were babies) and dear friend, Larry Campbell. We were not biological siblings, because I grew up an “only child.” However, the bond linking him and his brother and sister to me has been rare and truly a blessing for all four of us. Our parents were best friends, and we spent a lot of time together as children. His brother and sister have passed on, so it’s just Larry, with his family, and me with my family now.  I cherish the annual family gatherings when we are together.

Larry and I had an intense conversation a few weeks ago and he sparked within me the interest and curiosity to research our discussion topic.

In full transparency, I was having a problem with the way people in society, and some that I know personally, have been expressing themselves in current events and news reports with the use of what I will call “colorful” language; language that I was taught not to use. I mean, we have a standard, don’t we? Larry reminded me that according to many people’s perception, there was nothing wrong in expressing themselves like that. It was considered humorous or passionate.

Truthfully, it was a word that had not registered with me as very important. But those of you who know me well know it isn’t unusual for me to research the internet for information that interests me. This time I had no idea how much information I would find on this subject. In fact, there is so much information about it, I had to boil it down to simple basic facts to write a blog that didn’t swallow the opportunity to find love, empathy, and compassion for those who have a different perception of the world from my own perception.

Perception, which is now a word that I believe to be extremely important.

For example, you take whatever information you receive through your senses and make a judgment. Does your judgment or perception line up with reality? Another person may have taken the same information and made a different judgment. Possibly neither of those judgments match up with reality because every person will decide their own reality.

For me, personally, my reality is found in Christ. (Read the entire chapter of Colossians 2; especially verse 17). But I understand that not everyone allows the standard of God’s word to guide them. Anything that deviates, adds to, or subtracts from God’s word is not my standard. So, in that respect, I accept the perceptions that result from living by my reality. But I also understand that it is a godly choice for me to recognize and respect the perceptions of other people.

Perception depends on complex functions of the nervous system, but subjectively seems mostly effortless because this processing happens outside conscious awareness. In trying to define the word, even the synonyms I found were not exact. For example, discernment is listed as a synonym, but discernment carries with it the idea of learning how to analyze a situation.  Perception just happens as we experience different things and events through our senses. Other synonyms such as appreciation; recognition; realization; cognizance; awareness; consciousness; knowledge; acknowledgment; and grasp also need other elements of definition to achieve the exact same concept as perception.

I learned that observing differences in ourselves and others offers opportunities to understand others by recognizing those differences and why they happen. Most obvious and many times problematic, is the different colors of skin different individuals may be wrapped in, and their genetic makeup. It is only through intense effort and respect that understanding between different races becomes a pleasure to behold. The perceptions of each race will undoubtedly be noticeable in life choices and life boundaries.

The truth is that there is a big gap between how each person perceives their own reality and the perception of others’ reality.

The physical mechanism of perception is pretty much the same in all people: sensory organs such as the eyes, ears, and nose permit us to sense our environment, and the sensations received by them are routed to our brains, where they are interpreted and appointed meaning in a two-stage sequence. The first stage is recognition or identification, in which a configuration of light or sound waves is identified. At the second stage, the interpretation and evaluation of that which has been identified take place. The result of this process is not the same for all people, however, because the process is learned and therefore influenced primarily by culture.

Perception takes place within each individual, and it is each individual’s culture that primarily determines the meanings we apply to the stimuli that reach us. How we act depends on our perspective. There is diversity within cultures just as there is diversity between cultures. Cultural diversity in perception will help us better understand how different cultures perceive social aspects of environment. Social aspects of perception include not only description but evaluation as well. Culture strongly influences our subjective reality that there are direct links among culture, perception and behavior. 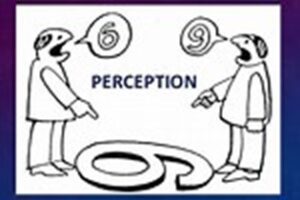 More recently, 6 and 9 have been written 6 and 9 to assist with our perception of these numbers.

Belief systems are significant to the study of intercultural communication because they are at the core of our thoughts and actions. We must be able to recognize the fact that different cultures have different realities. By understanding the beliefs of others, we are in a position to better understand their behaviors and also our own behavior. [i]

In short, the lesson here is to try to be kind always, sympathetic, empathetic, and forgiving each other for misguided differences of opinion and experiences. Take the time to learn about your circle of people as well as other people and try to understand why they think they way they do and why they form the perceptions that motivate their behavior.