Paul Bunyan is a giant lumberjack and folk hero in American and Canadian folklore. His exploits revolve around the tall tales and oral tradition of his superhuman labors. Oral tradition is not the same as testimony or oral history. It is compiled from information, memories, and knowledge held in common by a group of people, over many generations.

“Bunyan was a powerful giant, seven feet tall and with a stride of seven feet. He was famous throughout the lumbering districts for his great physical strength.” — K. Bernice Stewart & Homer A. Watt, “Legends of Paul Bunyan, Lumberjack” 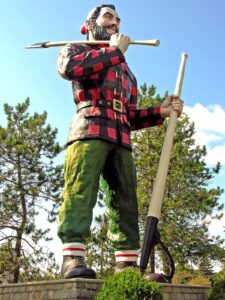 In books and cartoons, Paul Bunyan is customarily accompanied by Babe the Blue Ox. The character originated in the tradition of North American loggers, and was later popularized by freelance writer William B. Lougheed (1882–1958) in a 1916 promotional pamphlet for the Red River Lumber Company. He has been the subject of various literary compositions, children’s books, musical pieces, commercial works, and theatrical productions. His likeness is displayed in several oversized statues across North America.

This August 2020 Webstable Soup is NOT about Paul Bunyan. Now let me tell you about the other Bunyan, John. 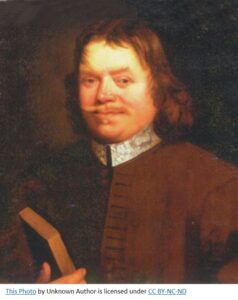 John Bunyan (1628-1688) was a Puritan preacher and writer in England. Bunyan had very little schooling. He followed his father in the tinker’s trade, and served in the parliamentary army from 1644 to 1647. In 1655, Bunyan became a deacon and began preaching. He experienced marked success from the start and was the pastor of the Bedford church.

John Bunyan’s greatest work, The Pilgrim’s Progress, which he wrote in 1676 while imprisoned for preaching without a license, has touched millions of lives throughout history, reminding believers that if we continue to persevere and follow the straight path, we will eventually be with the King in the Celestial City. But John didn’t always have such a strong faith in God’s grace.

John Bunyan spent much of his early years causing trouble and acting out. He had a bad reputation in Elstow, England, where he lived. His parents couldn’t control him, and he had no self-control either. He was a happy-go-lucky young man, but the thought of what would happen to him after he died tormented him day and night. So, he decided to do something honorable and sacrificial.

The English Civil War was a series of civil wars and political machinations between Parliamentarians and Royalists, principally over the manner of England’s governance and part of the wider Wars of the Three Kingdoms of England, Scotland, and Ireland. During the height of the Civil War, at the age of 16, John Bunyan joined the army. He was going to earn his salvation. While on duty, John was taken out of a siege, and another soldier asked to take his place. An enemy’s bullet struck the other soldier. God had spared him from danger, and John began to believe God wanted him alive for a reason. But he couldn’t shake the feeling that if he died, he would end up in hell. So he turned his life around and tried to be as “good” as he could be.

When he was about 21, he met three women who were full of joy and peace because of putting their trust in Jesus. The women and their preacher encouraged John to trust the One who saves those who cannot save themselves. “By grace are we saved through faith,” the preacher explained. John finally understood, and from that day forward, he trusted completely in the Lord and stopped trying to earn his salvation.

Full of joy, John began to share his faith with others. In fact, within four years he was drawing crowds. Preaching outside an official government church was against the law and John was arrested. During his 12 years in prison, he wrote a number of books including a story about a pilgrim named Christian, who constantly struggles, but because of God’s great grace, remains on the narrow path to heaven. That book was The Pilgrim’s Progress.

John could have walked out of prison and back home to his family by promising not to preach … but he refused. He told local magistrates he would rather remain in prison until moss grew on his eyelids, than to fail to do what God commanded.

In 1678, a few years after John’s release from jail, he took The Pilgrim’s Progress to a printer, with very little hope that it would be of much significance. The book was written for himself – not for the world. However, the book was instantly popular with every social class, and would go on to become the bestselling book (apart from the Bible) for generations.

Through The Pilgrim’s Progress, Bunyan captures us with incredible imagery and creative genius that has crossed cultures, languages, and centuries. The uneducated, once unruly commoner wrote a story with the ability to arrest the attention of readers century after century.

“I saw a man clothed with rags … a book in his hand and a great burden upon his back.” So begins the allegorical tale that describes Bunyan’s own conversion process.

Often disguised as something that would help him, evil accompanies Christian on his journey to the Celestial City. As you walk with him, you’ll begin to identify today’s many religious pitfalls. These are presented by men such as Pliable, who turns back at the Slough of Despond; and Ignorance, who believes he’s a true follower of Christ when he’s really only trusting in himself. Each character represented in this allegory is intentionally and profoundly accurate in its depiction of what we see all around us, and unfortunately, what we too often see in ourselves. But while Christian is injured and nearly killed, he eventually prevails to the end. So can we all.

John’s Bunyan’s trust in God’s Word is an inspiration to every believer. Through hardship and an unwavering trust in God, he has blessed even our generation with the story of every believer, and a call to stay on the straight path as we follow the King’s road. 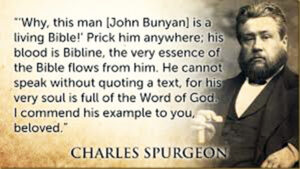 The Pilgrim’s Progress has inspired readers across the centuries to persevere in their faith. Since its publication in 1678, this book has been translated into more than 200 languages. It’s a worldwide bestseller, and it has become a hallmark among scholars and theologians around the globe. A staple for any home library!

“What God says is best, is best, though all the men in the world are against it.” — John Bunyan

This free animated movie is brought to you by RevelationMedia.com. For teens through adults. In my opinion it is not suitable for small children.  SM