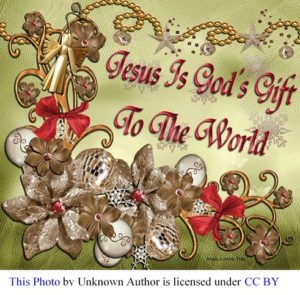 I grew up in a legalistic atmosphere that did not think it was right to celebrate December 25 as the day that Jesus was born because the date was not specified in the Bible.  Because of that, I missed many opportunities through the years to take advantage of the atmosphere of faith in the religious celebrations that have been for honoring the birth of Jesus in communities and families for approximately  2,000 years.

It’s a fact:  Jesus told us to remember his death (Luke 22:19; 1 Corinthians 11:24-25). We don’t know the exact date of his death either, but we remember His death every time we take communion together as Christians.

It’s a fact:  Christmas has become fantasized and commercialized.  But I trust that intelligent people are able to separate those characteristics from Jesus our Lord.

I changed my mind about what is lovely to celebrate, and I now realize that the date is not important; but the importance of the event is life changing for all who believe in Jesus, the Son of God…Immanuel, who is our salvation. So, I think it is appropriate to remind myself, and share with you, the story of the birth of Jesus, the Christ. [i]

18 This is how the birth of Jesus the Messiah came about: His mother Mary was pledged to be married to Joseph, but before they came together, she was found to be pregnant through the Holy Spirit. 19 Because Joseph her husband was faithful to the law, and yet did not want to expose her to public disgrace, he had in mind to divorce her quietly.

20 But after he had considered this, an angel of the Lord appeared to him in a dream and said, “Joseph son of David, do not be afraid to take Mary home as your wife, because what is conceived in her is from the Holy Spirit. 21 She will give birth to a son, and you are to give him the name Jesus, because he will save his people from their sins.”

22 All this took place to fulfill what the Lord had said through the prophet:23 “The virgin will conceive and give birth to a son, and they will call him Immanuel” (which means “God with us”). (Isaiah 7:14)

24 When Joseph woke up, he did what the angel of the Lord had commanded him and took Mary home as his wife. 25 But he did not consummate their marriage until she gave birth to a son. And he gave him the name Jesus.

2 After Jesus was born in Bethlehem in Judea, during the time of King Herod, Magi from the east came to Jerusalem 2 and asked, “Where is the one who has been born king of the Jews? We saw his star when it rose and have come to worship him.”

3 When King Herod heard this he was disturbed, and all Jerusalem with him. 4 When he had called together all the people’s chief priests and teachers of the law, he asked them where the Messiah was to be born. 5 “In Bethlehem in Judea,” they replied, “for this is what the prophet has written:

6 “‘But you, Bethlehem, in the land of Judah,
are by no means least among the rulers of Judah;
for out of you will come a ruler
who will shepherd my people Israel.’” (Micah 5:2)

2 In those days Caesar Augustus issued a decree that a census should be taken of the entire Roman world. 2 (This was the first census that took place while Quirinius was governor of Syria.) 3 And everyone went to their own town to register.

4 So Joseph also went up from the town of Nazareth in Galilee to Judea, to Bethlehem the town of David, because he belonged to the house and line of David. 5 He went there to register with Mary, who was pledged to be married to him and was expecting a child. 6 While they were there, the time came for the baby to be born, 7 and she gave birth to her firstborn, a son. She wrapped him in cloths and placed him in a manger, because there was no guest room available for them.

8 And there were shepherds living out in the fields nearby, keeping watch over their flocks at night. 9 An angel of the Lord appeared to them, and the glory of the Lord shone around them, and they were terrified. 10 But the angel said to them, “Do not be afraid. I bring you good news that will cause great joy for all the people. 11 Today in the town of David a Savior has been born to you; he is the Messiah, the Lord. 12 This will be a sign to you: You will find a baby wrapped in cloths and lying in a manger.”

13 Suddenly a great company of the heavenly host appeared with the angel, praising God and saying,

14 “Glory to God in the highest heaven,
and on earth peace to those on whom his favor rests.”

15 When the angels had left them and gone into heaven, the shepherds said to one another, “Let’s go to Bethlehem and see this thing that has happened, which the Lord has told us about.”

16 So they hurried off and found Mary and Joseph, and the baby, who was lying in the manger. 17 When they had seen him, they spread the word concerning what had been told them about this child, 18 and all who heard it were amazed at what the shepherds said to them. 19 But Mary treasured up all these things and pondered them in her heart.

22 After removing Saul, he made David their king. God testified concerning him: ‘I have found David son of Jesse, a man after my own heart; he will do everything I want him to do.’

23 “From this man’s descendants God has brought to Israel the Savior Jesus, as he promised. 24 Before the coming of Jesus, John preached repentance and baptism to all the people of Israel. 25 As John was completing his work, he said: ‘Who do you suppose I am? I am not the one you are looking for. But there is one coming after me whose sandals I am not worthy to untie.’

26 “Fellow children of Abraham and you God-fearing Gentiles, it is to us that this message of salvation has been sent. 27 The people of Jerusalem and their rulers did not recognize Jesus, yet in condemning him they fulfilled the words of the prophets that are read every Sabbath. 28 Though they found no proper ground for a death sentence, they asked Pilate to have him executed. 29 When they had carried out all that was written about him, they took him down from the cross and laid him in a tomb. 30 But God raised him from the dead, 31 and for many days he was seen by those who had traveled with him from Galilee to Jerusalem. They are now his witnesses to our people.

32 “We tell you the good news: What God promised our ancestors 33 he has fulfilled for us, their children, by raising up Jesus. As it is written in the second Psalm:

“‘You are my son;
today I have become your father.

34 God raised him from the dead so that he will never be subject to decay. As God has said,

“‘I will give you the holy and sure blessings promised to David.’

35 So it is also stated elsewhere:

“‘You will not let your holy one see decay.’

36 “Now when David had served God’s purpose in his own generation, he fell asleep; he was buried with his ancestors and his body decayed. 37 But the one whom God raised from the dead did not see decay.

38 “Therefore, my friends, I want you to know that through Jesus the forgiveness of sins is proclaimed to you. 39 Through him everyone who believes is set free from every sin, a justification you were not able to obtain under the law of Moses.

After the Resurrection of Jesus; Speaking to His Disciples – Acts 1:7-11

7 He (Jesus) said to them: “It is not for you to know the times or dates the Father has set by his own authority. 8 But you will receive power when the Holy Spirit comes on you; and you will be my witnesses in Jerusalem, and in all Judea and Samaria, and to the ends of the earth.”

9 After he said this, he was taken up before their very eyes, and a cloud hid him from their sight.

10 They were looking intently up into the sky as he was going, when suddenly two men dressed in white stood beside them. 11 “Men of Galilee,” they said, “why do you stand here looking into the sky? This same Jesus, who has been taken from you into heaven, will come back in the same way you have seen him go into heaven.”

3 Praise be to the God and Father of our Lord Jesus Christ! In his great mercy he has given us new birth into a living hope through the resurrection of Jesus Christ from the dead, 4 and into an inheritance that can never perish, spoil or fade. This inheritance is kept in heaven for you, 5 who through faith are shielded by God’s power until the coming of the salvation that is ready to be revealed in the last time. 6 In all this you greatly rejoice, though now for a little while you may have had to suffer grief in all kinds of trials. 7 These have come so that the proven genuineness of your faith—of greater worth than gold, which perishes even though refined by fire—may result in praise, glory and honor when Jesus Christ is revealed. 8 Though you have not seen him, you love him; and even though you do not see him now, you believe in him and are filled with an inexpressible and glorious joy, 9 for you are receiving the end result of your faith, the salvation of your souls.

THAT IS WHY WE CELEBRATE CHRISTMAS!