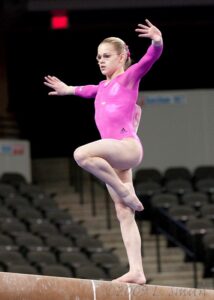 Life on a Balance Beam

Olga Korbut and Nadia Comaneci, two young women who totally changed the focus and direction of gymnastics, are names synonymous with the extraordinary skill of acrobatics on the balance beam.  Olga Korbut was, of course, a highly decorated athlete, with four Olympic gold medals to her credit. But it is not her results for which she is most remembered. The media whirl that surrounded her after her Olympic debut in 1972 caused a surge of young girls to join their local gymnastic clubs. This one Belarusian gymnast almost single-handedly turned women’s gymnastics into the popular sport it is today.

On a January 2019 visit to the Capital Region, Nadia Comaneci was shown a highlight clip of her gymnastics routines at the 1976 Summer Olympics in Montreal.

A 14-year-old Comaneci didn’t comprehend the impact her performance had on the hundreds of millions who watched, but it is a little clearer now, at age 57.

Comaneci, a native Romanian who is married to U.S. gold-medal gymnast Bart Conner and now lives in the U.S., stopped competing in 1984, but she has seen the growth of women’s sports.

In August 2019 she was the honorary captain of Team World in the inaugural Aurora Games, held Aug. 20-25 at Times Union Center. The six-day women’s sports festival was created to celebrate women athletes and their accomplishments.

Not every gymnast is so successful.  The father of a young gymnast relates this story:

“We were at a huge Optional Invitational meet and in the same rotation with one other team.  We were starting the meet out on beam.  Our three Level 8 girls were last in the rotation and were already warmed up.  Five girls from the other team had already gone and scores were running about average.  The next girl stepped up, saluted the judges and prepared to start her mount.  She was doing a running approach toward the end of the beam and had been warming up a step-on mount.  She started her run aggressively but on her last step and she accidentally stubbed her toe into the board.  She tripped on the board and stumbled, falling hard and hit her face right on the end of the beam.  She got up off the board and apparently decided that she couldn’t repeat her mount and got immediately up on the beam to finish her routine.  She was on the verge of tears and very shaky.

“What followed was one of the worst series of falls and errors I have ever seen in a meet.  She went to step into her split leap and partially missed her footing.  Her foot slipped off the beam and she straddled the beam and fell on her head again – not hard but enough to shake her up even more.  She fell on her back handspring series, a back tuck and her jump series and wobbled on every skill she didn’t fall on.  She fell on her full turn and got up facing the wrong way.  You could see that blank lost look gymnasts get when they have completely forgotten where they are in a routine.  Finally she figured it out, turned around and got her routine back on track.  By that time, the bell indicating that time had been called had rung and she was nowhere near done with her routine.  She even fell one more time before her dismount, got back up and threw a cartwheel back dismount which was way short on the landing.

She gave a kind of half-hearted salute to the judges and started walked over head down to where her coach and teammates were. We were all sitting by the bleachers where mostly team parents from the other team were sitting to watch the beam routines.  The only way the judges were going to give this routine a 3.0 was if they, like everyone else, couldn’t bear to watch the embarrassing display and missed some of the deductions.

In this time of coaches so concerned with how what their gymnasts do makes them look to other coaches, we were all sure that this girl was in for it now and was going to hear about it from her coach. She came walking over with that look in her eye that she knew what was coming.   We have all heard coaches scream at, be sarcastic to and to even refuse to acknowledge gymnasts who had done far less wrong than this girl.  What was going to be the coach’s reaction?

She was already punishing herself you could see just from the look on her face.  She was embarrassed, hurt, dejected and almost ready to cry.  She walked up right in front of her coach and stood with her head hung down.  He took one look at her, put his arm around her and turned to the rest of his team and the parents sitting there.  Fortunately, we were sitting close enough to hear what he said to all of them quietly, “I am more proud of what just happened than any of you can possible imagine.  While we have all seen better routines, we have all just seen the kind of courage and bravery that is the true essence and spirit of this sport.  Jenny had many chances to quit during that routine, even to never even really start the routine at all.  Instead, she demonstrated the qualities that we so admire and are trying to instill in our gymnasts – guts, determination and a resolve to never quit even in the face of tremendous difficulties.  No matter what else happens at this meet, we can all consider this a victory to remember.

You could tell which parents were Jenny’s by the way they sat up, proud now of their daughter that they saw in a new light.  Her teammates crowded around her, hugging her and you could just feel the smile coming back onto her face.   One of my girls, with a lump in her throat, turned to the other girls and whispered, “I hope I can grow up to be a coach like that someday.”   “Funny,” I said to myself as I went over to set the board for our gymnasts, “That’s exactly what I was thinking.”

Do you, like me, seem to keep falling off the balance beam of life?  Working so hard to “make it” that we forget to take the time we need to rest and recoup so that we can work more efficiently and effectively?

Everything in Life in Balance

31 There is a time for everything, and a season for every activity under heaven:

9 What does the worker gain from his toil? 10 I have seen the burden God has laid on men. 11 He has made everything beautiful in its time. He has also set eternity in the hearts of men; yet they cannot fathom what God has done from beginning to end. 12 I know that there is nothing better for men than to be happy and do good while they live. 13 That everyone may eat and drink, and find satisfaction in all his toil–this is the gift of God.

As the author of Ecclesiastes, probably King Solomon….the Teacher, looks about at the human enterprise, he sees man in mad pursuit of one thing and then another–laboring as if he could master the world, lay bare its secrets, change its fundamental structures, break through the bounds of human limitations and master his own destiny. He sees man vainly pursuing hopes and expectations that in reality are “meaningless, a chasing after the wind.” (1:14; 2:11,17,26; 4:4,16; 6:9).

But faith teaches him that God has ordered all things according to His own purposes (3:1-15; 5:19; 6:1-2; 9:1) and that man’s role is to accept these, including his own limitations, as God’s appointments. Man, therefore, should be patient and enjoy life as God gives it. He should know his own limitations and not vex himself with unrealistic expectations. He should be prudent in everything, living carefully before God and society and, above all, fearing God and keeping his commandments (12:13).