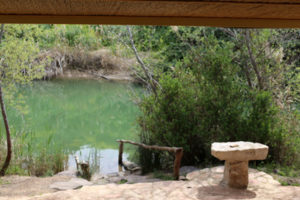 Thinking about myself and maybe other women, I have been trying (not always successfully) to become a balanced woman of God.  I thought about being healthy, mentally, physically, spiritually and socially – Where did I want to go in Scriptures to think about good health?  The Healing Pool.

John the Apostle, son of Zebedee and Salome, younger brother of James, who was also an apostle.  Both James and John were eye-witnesses of Jesus’ ministry.

James’ and John’s real character was such that they were known as a “son of thunder.”  (Mark 3:17). It is generally agreed that this same John wrote 1, 2, and 3 John and Revelation.

The structure and style of John’s account of the gospel is different from the other accounts in that it deals with the nature and person of Christ, presenting him as divine, but also emphasizing His humanity, allowing us to see His hunger and thirst and weariness and pain, and ultimately, His death.

John omits the birth, biography, baptism, temptation, and parables of Jesus.  Instead, he focused on 7 miracles, and 5 of those are not mentioned anywhere else. John played a leading role in the work of the church in Jerusalem, and later went to Ephesus.  For some reason, he was exiled to the island of Patmos, and it was there he received the Revelation.  While he was in Ephesus, he probably would have passed on to the church in Ephesus the story found in John 5:1-14.

Read verses 1-2 – John 5 –  1 Some time later, Jesus went up to Jerusalem for one of the Jewish festivals. 2 Now there is in Jerusalem near the Sheep Gate a pool, which in Aramaic is called Bethesda and which is surrounded by five covered colonnades.

Obviously, John was writing to people who were not familiar with the vicinity, otherwise he would not have told them so much.

Great numbers of disabled people used to lie there…

Have you ever been to that archeological site?  This was not your backyard pool or an Olympic-size pool, this was a pool slightly larger than an American football field.  There were 5 covered porches (or colonnades), two down each of the sides and one down the middle.   The one down the middle basically split the pool into two sections.

Historically, you have people with two kinds of sicknesses.  Both long-term.  One kind was represented by this man…the lame, those who were disabled.  Another kind of sickness would be what today we would describe this as a kind of hospice care.  Essentially, this was a place where people went to die.

So if you could combine today a modern assisted living, nursing home, and hospice care facility, you’ve got the pool of Bethesda. Have you ever heard of a hospital named Bethesda?  That’s where it comes from… right out of this chapter.

Read verses 5-6 – 5 One who was there had been an invalid for thirty-eight years. 6 When Jesus saw him lying there and learned that he had been in this condition for a long time, he asked him, “Do you want to get well?”

Another thing to notice is that when Jesus tells about this pool, He says “a great number…”  V. 5 says, “one of them, an invalid, had been lying there for 38 years.”  Jesus saw him lying there and learned that he had been in that condition for a long time, and He asked him, “Do you want to get well?”

Another thing – this man is not a long-term friend, follower or family of Jesus.  How do we know that?  The Bible says Jesus went in and learned that the man had been sick for 38 years.  If he had been a close friend or follower, Jesus would have known he had been sick for 38 years.  So you can imagine it’s like Jesus is going to a local nursing home and visiting people he doesn’t know.  Just going in and caring for people.

So he goes in and asks this man if he wants to get well.  How many of you can imagine that the question sounded a little bit insensitive?  I’m not accusing Jesus of that at all, but can you imagine that coming across as a little rude or insensitive?

But there is a reason why Jesus took this approach to health and a reason why John includes it in his gospel.  Read with me.  Verse 7 – 7 “Sir,” the invalid replied, “I have no one to help me into the pool when the water is stirred. While I am trying to get in, someone else goes down ahead of me.”

Now let’s see the scene…..according to some early Christian writers about this passage, at certain times, God would use this pool as a place of healing.  The KJV says that an angel came and stirred the water, But some of the later translations do not record this verse.

So, sometimes this pool was used as a place of healing and when the water was stirred, whoever got in first was healed.  I don’t know why, but you see, when Jesus asks this man if he wants to be healed, he blames someone else.  He says…other people get in before I do.

Verse 9-10 – 9 At once the man was cured; he picked up his mat and walked. The day on which this took place was a Sabbath, 10 and so the Jewish leaders said to the man who had been healed, “It is the Sabbath; the law forbids you to carry your mat.”

Amazing! This was a miracle!  And they’re bugged because he’s carrying his mat?

Can you hear him whining?   Hey, it’s not my fault.

Verse 12-13 – 12 So they asked him, “Who is this fellow who told you to pick it up and walk?”  13 The man who was healed had no idea who it was, for Jesus had slipped away into the crowd that was there.

Verse 14 – 14 Later Jesus found him at the temple and said to him, “See, you are well again. Stop sinning or something worse may happen to you.” 15 The man went away and told the Jewish leaders that it was Jesus who had made him well.

Now see that he was well at one time…..second, stop sinning or something worse may happen to you? What could be worse than being lame for 38 years? Maybe being lame for 39 years?  But I’m thinking, what kind of sinning had the lame man done?  He couldn’t even crawl over to the edge of the pool…he’s not chasing women, not picking pockets…

Maybe Jesus is indicating to us that his problem is internal.   See Jesus was emphatic!!  Stop your sinning!!  Does the man disagree?  Does he put up an argument?

No!  Because we already had 2 clues that this man had a problem…Jesus said, do you want to get well?  The man said, it’s not my fault.  They said why are you carrying your mat, he said it’s not my fault!!

People who WANT to get well, who internally desire to get well, have an unbelievably better chance of being restored to health than those who have not addressed the question of HAVING THE DESIRE TO GET WELL.

People who over-medicate themselves with the consumption of alcohol and suffer the hangover, know that the problems are still there when they get sober.  People with drug addiction know the same thing.  People who seek to temporarily anesthetize themselves through bursts of anger, through the pursuit of money or isolation…all of those are temporary and none of them will fix the problem…none of them will fix the soul.  God is asking us is, do you want the things that makes a healthy Christian?

What are some characteristics of a healthy Christian?

With the lame man, Jesus….

How badly do we want to be healed?  Do we make excuses?  Did Jesus come into your life and offer you the freedom to take a step toward Him?  What we do next is what tells the story about our desire to get well.

Dear God, we know that you are the Great Physician!  There are things in our lives that we can’t get rid of.   Sometimes we don’t even understand why we’ve done the things we’ve done.  Often it’s easier for us to point to external circumstances to try to rationalize why we let the pressures of life get to us.  You’ve offered us healing, and we hear the question, do you want to get well?

Father, I ask that you touch each person reading this blog.  With your Holy Spirit, please heal them of  the things that may be hindering them from getting completely well.  Help us all to want to get well.  I pray that you fill us with the desire to be well, even if the process hurts. And we thank you for loving us enough to offer us that healing.