When I was working in Corporate America, I was at times a contributor to a quarterly newsletter.  As Summer approaches, and the time for annual vacations looms brightly on the horizon, I was reminded of one specific article I contributed specifically for those employees who just never seemed to find the time to take a vacation.  For them, it seemed like a waste of time, and only a deterrent to their goals of advancement and promotions.  Maybe you know someone like that.  I reprint it here for whatever it’s worth. – Sandra 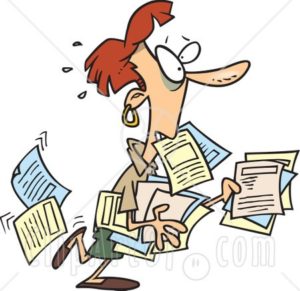 Work·a·hol·ic (wûrk-hôlk) n. – One who has a compulsive and unrelenting need to work.

Henry is a workaholic or he is about to become one.  He just can’t stop working. Whether he is in the office, at home, in bed, or socializing, he cannot stop thinking about work or talking about work.   He knows that it is human nature to measure other people by who they are, what they do and what they have, with heavy emphasis on the last two.  Somewhere in his past, he learned that it is what you do and what you have that brings approval, acceptance and respect.  But he hasn’t quite grasped the concept that these aspects are conditional, since they are based largely on performance.  Unhealthy work patterns have been established with unrealistic expectations and the need to perform flawlessly. Through these overt or covert messages, Henry has come to believe that worth is based on performance and accomplishment.

“Overwork is this decade’s cocaine, the problem without a name,” states psychotherapist Bryan Robinson, author of Chained to the Desk: A Guidebook for Workaholics, Their Partners and Children, and the Clinicians Who Treat Them (New York University Press, 1998).   “Workaholism,” Robinson says, is “an obsessive-compulsive disorder that manifests itself through self-imposed demands, an inability to regulate work habits, and an over-indulgence in work — to the exclusion of most other life activities.” The clearest indication, he argues, is simply the inability to turn work off. Robinson suggests that as much as 25% of the population qualify as workaholics — which would make the syndrome by far the country’s most common addiction.

In Japan, the country whose workers spend nearly as much time on the job as their U.S. counterparts, employers are required — by law — to offer employees 25 paid days off per year.  Yet, over 10,000 deaths per year are attributed to overwork. The Japanese even have a word for death by overwork – ‘karoshi’.

Henry is right about one thing…working hard is necessary to succeed on the job.  Work does have social value and can provide a social network for both men and women.  Successes at work can certainly drive self-esteem in a positive way.   God made man with the desire and capacity to work.  But if he’s working instead of developing other interests, or if he’s spending time at work instead of with family and friends, then he may have already lost his perspective.  On the other hand, if he loves his work and doesn’t need to control every aspect of his job, he is one of the lucky people who can expect the emotional, monetary and personal benefits of a happy career.

The problem is that Henry is beginning to feel consumed by his work and his kids have almost forgotten what he looks like.  He doesn’t find the happiness he once found in his work.  He is irritable and often feels bad and also feels guilty.  He should be getting more rest and should be paying more attention to his wife and kids.  Why is he feeling like this?  He has always intended for his crucial work habits to put him in a position to be able to afford a nice home and things for his family, but……

Henry needs to step back and ask himself if what he is succeeding to do in his career is worth what he may be giving up in other areas of his life.

Have you given any thought lately to the balance you’ve struck between your work-life and your actual life?   A generation ago, people left work at work at the end of the day. Today, technology has blurred the boundaries between work and home.  The current work-from-home trend has contributed to letting work dominate instead of balancing the demands of work and home life.  In many ways, home has become an extension of the workplace.  Although this tendency is more common in males, females have also fallen into this “gotta work…gotta have it now” addiction.  It doesn’t happen overnight, and there are many contributing factors, not the least of which is that employers reward the single-mindedness of the employee who works around the clock.  The uncomfortable realization that to an employer, an employee is merely a commodity whose sole function is to benefit the company leaves many fearful for their job security if they don’t outperform their peers.

Technology has further complicated matters.  The original goal of technology was to reduce the work week by at least one full day.  Instead, people are getting more work done in less time but working more hours.  Cell phones, smart phones, pagers, computers and laptops have made work more accessible to people and people more accessible to work.  In fact, many are accessible to employers 24 hours a day.

The key to balancing work and home life lies in thoughtful self-examination and recognizing some potential warning signs in yourself and your family, such as:

If these things are familiar to you, you need to talk to someone before you get burned out at work — or worse, irreparable damage has been done to your family.   It’s important to create space for some kind of downtime in your life. If not, the work you’re so passionate about can really suffer, too.  If you find yourself waiting for that big promotion before you stop working so many hours; when you decide you have to earn six-figures before you can spend more time at home, you are setting yourself up for burnout at work and alienation from your family.  Unfortunately, even if you achieve these goals, you’ll likely simply set new, equally tough new goals, and the “life” you thought you could put off living until later has gone on without you.

31 There is a time for everything, and a season for every activity under heaven:

9What does the worker gain from his toil?

10I have seen the burden God has laid on men.

11He has made everything beautiful in its time. He has also set eternity in the hearts of men; yet they cannot fathom what God has done from beginning to end.

12I know that there is nothing better for men than to be happy and do good while they live.

13That everyone may eat and drink and find satisfaction in all his toil–this is the gift of God.