Anyone who knows me may know that I love word games. Before I go to bed, I will play word games on my phone.  It clears my mind of the negative stimuli that has collected during the day from current events and local news tragedies and prepares it for my moments of prayer. I realize that not everyone has that interest, but since I do, I want to use this month’s Webstable Soup to tell you about one instance of turning science into word games.  I hope you will find it interesting.

How flexible  a thinker are you? Give it a 5 second test: quickly identify the color of each of the words below (don’t read them). Say the colors out loud. 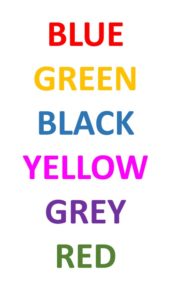 How accurate were you? How long did it take? This task, called the Stroop Test, is much more challenging than it first appears. It’s much harder to identify a color when it’s different from the word than it is to identify when the two match. This challenging test relies on two key cognitive skills, response inhibition and selective attention.

Brief History of the Stroop Test

In 1935, a farmer’s son named John Ridley Stroop became the first to publish in English on the current version of this cognitive task. Developed as part of his dissertation at George Peabody College, his task became the basis for the Stroop Test, which remains a widely used neuropsychological assessment to this day.

How your brain processes the Stroop Test

Because most people’s automatic response is to read a word, the Stroop Test is a classic test of response inhibition. This skill involves responding quickly while avoiding incorrect impulses that may interfere with accomplishing goal-driven tasks. Response inhibition is associated with the brain’s executive function, and brain imaging studies have found that that performing the Stroop Test activates brain areas involved in executive function, such as the dorsolateral prefrontal cortex.

The Stroop Test also challenges selective attention, or the ability to choose which stimuli to focus on and which to ignore. The mental flexibility required to switch between multiple stimuli is essential: without good selective attention, it can also be easy to make errors.

In his experiments, Stroop administered several variations of the same test for which three different kinds of stimuli were created: Names of colors appeared in black ink: Names of colors in a different ink than the color named; and Squares of a given color.

Unlike researchers now using the test for psychological evaluation, Stroop used only the three basic scores, rather than more complex derivative scoring procedures. Stroop noted that participants took significantly longer to complete the color reading in the second task than they had taken to name the colors of the squares in Experiment 2. This delay had not appeared in the first experiment. Such interference were explained by the automation of reading, where the mind automatically determines the meaning of the word (it reads the word “red” and thinks of the color “red”), and then must intentionally check itself and identify instead the color of the word (the ink is a color other than red), a process that is not automated.

The Stroop effect has been widely used in psychology. Among the most important uses is the creation of validated psychological tests based on the Stroop effect permit to measure a person’s selective attention capacity and skills, as well as their processing speed ability, It is also used in conjunction with other neuropsychological assessments to examine a person’s executive processing abilities, and can help in the diagnosis and characterization of different psychiatric and neurological disorders.

Researchers also use the Stroop effect during brain imaging studies to investigate regions of the brain that are involved in planning, decision-making, and managing real-world interference (e.g., texting and driving).

And THAT, dear readers, is why texting and driving is distracting and dangerous!  Just don’t do it!