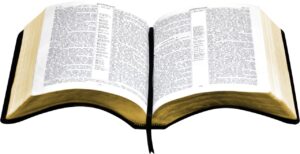 I don’t know about you, but more recently I have discovered that when I become involved in a religious discussion, I need to pay close attention to the language I use because I want to be understood, but the normal Christian terms are a foreign language to many people, especially the younger generations.  You will not be able to communicate the message of Christ if the other person doesn’t understand the concepts of that culture.

As I begin this article, I want to make myself clear. I believe that every translation of the Bible is clear enough for anyone who wants to learn the message of the Bible to understand and to be saved by the blood of Jesus Christ. My objective is not to find one translation better than the others, but to find the one that is easier for a new Bible student to understand. That may also include finding a Bible written in the first language of the student, i.e., Spanish, Mandarin, or Braille.

However, there are some English religious words that should probably continue to be used because each one stands for a definite doctrinal teaching of the Bible, such as righteousness, redemption, atonement, justification, trinity, and incarnation, just to name a few, that cannot be replaced with other terms to describe these realities of salvation and God.

The character of many theological words has changed as time has passed. As an example, the language of the King James Version (KJV) of the Bible contains “thee”s and “thou”s and many words that were common in 1611 when that translation was first recognized as the Holy Bible.

Yes, we may be able to understand what that translation is saying, and the KJV has continued to be popular in churches for its majesty and reverence for God’s word.  But it is written in seventeenth-century English, which may or may not resonate with modern and younger Bible students.  So, let’s look at the same scripture in three different translations:

14 Do all things without murmurings and disputings:

15 That ye may be blameless and harmless, the sons of God, without rebuke, in the midst of a crooked and perverse nation, among whom ye shine as lights in the world;

16 Holding forth the word of life; that I may rejoice in the day of Christ, that I have not run in vain, neither laboured in vain.

17 Yea, and if I be offered upon the sacrifice and service of your faith, I joy, and rejoice with you all.

14 Do everything without complaining and arguing, 15 so that no one can criticize you. Live clean, innocent lives as children of God, shining like bright lights in a world full of crooked and perverse people. 16 Hold firmly to the word of life; then, on the day of Christ’s return, I will be proud that I did not run the race in vain and that my work was not useless. 17 But I will rejoice even if I lose my life, pouring it out like a liquid offering to God, just like your faithful service is an offering to God. And I want all of you to share that joy.

14 Do everything without grumbling or arguing, 15 so that you may become blameless and pure, “children of God without fault in a warped and crooked generation.” Then you will shine among them like stars in the sky 16 as you hold firmly to the word of life. And then I will be able to boast on the day of Christ that I did not run or labor in vain. 17 But even if I am being poured out like a drink offering on the sacrifice and service coming from your faith, I am glad and rejoice with all of you.

Over the years, the original Hebrew and Greek words have been translated into many different versions.  Some are true translations, others are paraphrases, and still others are one or more person’s interpretations.  The key differences between interpretation and translation are found in each person’s or group’s medium and skill set.  Interpreters usually translate spoken language orally, while translators translate the written word.

Sadly, Christians seem to use “grace” in the way the culture has taken over the term to mean, “let me slide here.” Banks offer a “grace period.” I would prefer that we return to the biblical meaning of “grace” and separate this usage from merely “forgiveness” or “give me a break here” or “love” that the term has come to mean.

2. Some Christians are still uncomfortable with the term SIN or SINNER, so they talk of their “sins” as “mistakes” or they say, “I messed up.” When I thought about everyday language that fit what the Bible actually means by “sin” I settled on “failure” and “crime.” Both of these alternative terms make sense to non-Christians and Christians alike.

Maybe it’s time for an update. Our “sins” are crimes against God and other people. We have a rap sheet that makes us felons before God (if we are apart from Jesus). I like crimes because the term has a feeling of revulsion to it. It’s also less easy to label lying as a “little crime” the way we might do with saying “little sins.” No, when I lied, I committed a crime; I am a criminal. I think everyone understands that severity better than the terms “sinner” and “sinful” that are mostly religious (and meaningless to many people).

3. HOLY and HOLINESS are beautiful terms. I love the concept of them, however, I think we may have lost some of the depth of the terms.  As with some other terms, “holy” probably conveys little or no meaning to the non-Christian. The true concept is based on the absolute otherness, uniqueness, and separateness of God from us in all ways. Being the Holy One, God is the only one who is God. God’s otherness and differentness includes separation and purity from evil.

We think “morally pure” or “righteous,” and those words are correct, but let’s regain the depth of the absolute holiness of God in comparison to ourselves and realize that only by God’s Holy Spirit can we claim any semblance of holiness.

4. People usually don’t use EXAULT in conversation about anything unless they are talking about a biblical passage or some topic close to a Christian activity. It means to “lift up” or “honor,” and these are commonly understandable terms for the same idea that “exalt” describes today.

5. I don’t think I’ve ever said the word BEHOLD except when reading aloud the biblical text. I think it means “Look!” in most cases. We usually just say “pay attention!” “Look at this!”

This certainly is not an exhaustive list of words worth understanding. But I hope it has been useful information, even if it only makes us think more carefully about the words we use when talking with non-Christians, especially when we want to make sure they understand what we mean and more importantly, what the Bible means.