Have you ever been called a “Goody Two-Shoes”?  Recently a person, whom you would not know even if I said their name, called me a goody two-shoes because I didn’t appreciate nor laugh at an off-color story that they thought was hysterically funny!

I didn’t know at the time if I should feel pleased or feel insulted. The name implies that a person is inferior because of the values that they embody. It’s a weird insult because it attacks a person whose social benefit is that they follow rules and conform to ideals that they want to have in their lives. The phrase, goody two-shoes, describes someone who acts in an honest way whenever possible. In other words, they regularly do what is considered right.

In another negative connotation, such a person can be a self-righteous tattle-tale, wanting to get other people into trouble by broadcasting their faults, failures, and weaknesses in an effort to make themselves look better, smarter, and more acceptable. That is not the connotation I want to discuss now. 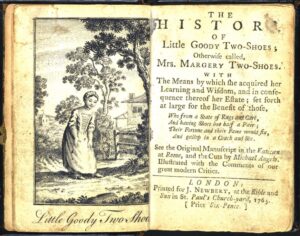 I wondered where the expression of the English phrase, goody two-shoes, came from. Unfortunately, it’s not clear. However, it’s believed that the expression was popularized by the book, The History of Little Goody Two-Shoes, published in 1765. It tells the story of two orphans, (Margery Meanwell and her brother Tommy), and their escape from the poverty into which the death of their parents has cast them. Dressed in rags and having only one shoe, Margery is given two shoes by a charitable gentleman. Through hard work she becomes a schoolmistress, before making a good impression on the local landowner and marrying him. She inherits his wealth when she is widowed, although in fact her brother had returned from overseas with a fortune just in time for her wedding, providing Margery with a dowry. Margery’s wealth enables her to help the poor just as she herself had been helped. She remains adamant that money is to be used for the good of others less fortunate than oneself, not for personal benefit. This earning of wealth serves as proof that her virtue has been rewarded, a popular theme in children’s literature of the era.

Goody Two-Shoes is a variation of the Cinderella story. Despite the obvious moral dimension, with many lessons about the usefulness of moral virtues such as education, honesty, and rationality, Goody Two-Shoes was clearly written to entertain. The book was popular well into the 19th century, and the writer Charles Lamb remembered it with great fondness.

The History of Little Goody Two-Shoes is a children’s story. [i] The story popularized the phrase “goody two-shoes” as a descriptor for an excessively virtuous person or do-gooder. The anonymous story was published in London by the John Newbery company, a publisher of popular children’s literature. In his introduction to an 1881 edition of the book, Charles Welsh wrote: Goody Two-Shoes was published in April 1765, and few nursery books have had a wider circulation, or have retained their position so long. The number of editions that have been published, both in England and America, is legion, and it has appeared in multiple versions, under the auspices of numerous publishing houses in London and the provinces, although of late years there have been no new issues. [ii]

While this book may have helped to popularize the phrase, the expression itself is older. According to a few places, such as World Wide Words, this idiom makes an appearance in a poem called Voyage to Ireland in Burlesque, by an English poet named Charles Cotton, 1670, possibly speaking of a nagging wife:

“Mistress mayoress complained that the pottage was cold;
‘And all long of your fiddle-faddle,’ quoth she.
‘Why, then, Goody Two-shoes, what if it be?
Hold you, if you can, your tittle-tattle,’ quoth he.”

This means the phrase is at least 349 years old!

Christians living now in the United States are not generally persecuted as heinously as they were in the first century.  At least we are not being thrown to the lions or burned at the stake. We have laws against those types of actions. But there are forms of disrespect that Christians all over the world must and will endure for Jesus Christ… some worse than others, but all causing hurt and frustration. The fact is that Satan loves it when that happens, and will mock and taunt us when we are in our weakest moments. He wants us to fail in our efforts to be righteous.

But remember, there’s nothing wrong with being a good person. God knows we need more of them in the world.