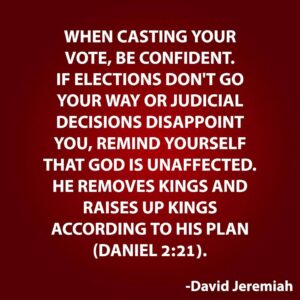 These are words you may never have heard me say, because I have avoided involvement in politics all my life!  I don’t like confrontations. I personally don’t like being involved in disputes or disagreements; and the political arena has become like Daniel’s lion den in this year of elections. So I have tried to keep my mouth shut, because I know that there are those whom I hold dear to me who do not agree with my opinion. That is their right, just as it is my right to have my own opinion. Only God knows and controls this current political outcome. I think he can handle it better than I can.

However, I do have an opinion and I do have a voice, so in this month before the Presidential election, I want you to know where I stand and why.

My Dad was a Conscientious Objector in WWII

This is a story that until right now, only my family has known.  But my dad has been gone a long, long, time, and the people who knew him…many of them are gone as well…and I can’t think that it makes much difference to keep it to ourselves now.

When my father was a young, newly married man, he accidentally killed his hunting buddy  in a tragic hunting accident.  Daddy’s rifle misfired sideways and a bullet hit and killed his friend.  He carried his friend’s dead body back to the boat they had used to row to their hunting site, and rowed his body back up the Coosa River to take him home.

There were many long-lasting, traumatic events to follow that horrible event.  My dad’s continual nightmares, and the virtual black-mail by the young victim’s family to guilt my dad into helping them financially for many years, and the unending grief he felt when those dark memories crowded out the memories of the sweet friendship that he had lost.

In the early 1940s, when World War II was drafting young men for wartime, my dad became a conscientious objector. Not because he was a “sissy” as some people accused, but because he knew what it felt like to kill another human being and he said he just could not go through that again. So he was granted that military status because he worked at Goodyear in Gadsden at the time, and they manufactured the rubber and tires for airplanes, jeeps, tanks, and other military vehicles.  So he served our country in that way. He became a minister who preached the good news of Jesus and a better way of kindness, gentleness, and humility. And he never forgot the beauty of life, or the ugliness of the unexpected death of someone you care about.

My Uncle John was a Wartime Soldier

My mother’s brother, John Horan, III, served five years in the U.S. Army.  At one point he was stranded in a jungle area where a downed Japanese plane had been left abandoned, and while he was waiting to be rescued, he broke off a small piece of the plane’s broken acrylic windshield and stuck it in his pocket.  Later, as he walked guard duty, he used his dog tag as a pattern with sandpaper to create a small picture frame to hold photos of me and my mother.  For the past twenty-plus years, that “dog tag” has been constantly worn around my daughter Debbie’s neck. You may have seen it and not known its significance.  Shown front and back. 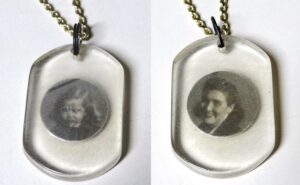 When Uncle John was discharged, he came to live with us.  I was just a little girl, 8 or 9 years old, but I remember he would sometimes yell himself out of a nightmare or just get up and pace the floor to get him through the dark nights of horrible memories.

My Uncle Grayson Was a Career Officer  in the Army

My father’s brother was a Retired Colonel in the U.S. Army when he passed away.  Before he retired, he served as a hospital administrator in several different countries in Europe, Hawaii, Walter Reed National Military Medical Center in Bethesda, Maryland, and Madigan Army Medical Center in Fort Lewis, Washington. Three of his sons and grandsons have followed in his military footsteps serving our great United States of America! One of my cousins now serves in the Pentagon and was in service there when September 11, 2001 changed all our lives.

But in my family, it all started even before then. My great-great-grandfather, Thomas Queen, from Cobb County, Georgia, (as he had been fighting to free people of ANY color from slavery), was being held in a prisoner of war camp in Indiana at the end of the Civil War. When he was finally released, he walked from that Indiana prison back to Cobb County, and settled on the acreage surrounding Queen’s Mill Road, in Mableton, which was named for him. There he raised his family. Grandfather Thomas Queen gave land and homes to free people of color.  They ate at his table and toiled on his farmland. That land is now surrounded by residential property. They raised their own families there and some of those colorful people were buried in the Queen’s Cemetery not far from where he is buried. Thomas Queen helped to establish the Liberty Hill Church of Christ in Mableton. It’s gone now, but it was once a thriving church.  I still have one of the metal road signs that directed the way to the church building.

Civil War records state that they don’t know what happened to Thomas Queen.  But my family knows. My grandmother and her eleven siblings and four half-sisters were his grandchildren. Not royalty, but Queens in the most admirable sense of the word!

So What Does That Have to do with Politics?

You may be wondering why I went into all that detail about my personal family history.  Because I want you to understand that the more things change, the more they stay the same. [ii] I have lived through fourteen (14) Presidents of the United States!  Franklin D. Roosevelt was in office when I was born.  The first election I remember was when Harry S. Truman won the election.  Then, because of my military heritage, I was thrilled, even at 13 years old, when General Dwight D. Eisenhower became President.

I was born and raised in Gadsden, Alabama. I remember when Rosa Parks bucked the system of segregation in Montgomery in 1955-56. I remember when President John F. Kennedy was assassinated in 1963. That was one of those events you always remember where you were when you received the news.

I remember when Governor George Wallace earned national notoriety by standing in front of the entrance of the University of Alabama, blocking the path of black students. He desperately longed to be President of the United States, and made four bids for the Presidency, but in May 1972, Governor Wallace was shot by an assassin and he lived, paralyzed from the waist down for the remainder of his life. In 1965, Martin Luther King Jr. called Wallace “perhaps the most dangerous racist in America today!”

Does any of this sound familiar? Satan must be clapping his hands to see how these earth-people are falling all over themselves to do his bidding!

I take it as a personal affront when there are those who want to take away the selfless efforts of our police officers because of the mistakes of a few; when those who want to de-fund our police, or dishonor our flag and our military – those who take a knee when the American flag is flying for the free and the brave – when Memorials to our service men and women are defaced and spit on – when history is held in contempt – when people want to delineate between skin colors, and when riots cause death and destruction even though wars have already been fought to set prisoners free. Maybe we have not been grateful enough!

You are seeing what happens when power is taken away from our law enforcement officers. We need to be thanking them for their service, not de-funding them!!  On top of all that, yes, we want the Covid-19 restrictions to go away! The whole world has had their lives turned upside down!

These days will pass, and there will be other challenges. The more things change, the more they stay the same.

Please vote, and when you vote, in whatever way you vote, please think about the future of the next generation of Americans. Pray God’s blessings on us all!